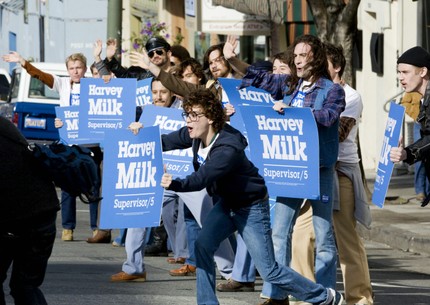 I got into a bit of trouble with some publicists recently because in a capsule review of Gus Van Sant’s latest film Milk, I gently chastised that film’s U.S. distributor, Focus Features, for holding back its release until after the presidential election. The folks at Focus have been quite sensitive about these issues, due to negative pre-release blog buzz which intimated that Milk had been held back from the fall festivals (Cannes, Venice, and Toronto) because it was a piece of junk. I, for one, never bought this; Focus and Van Sant were quite astute in their decision to world premiere Milk at San Francisco’s Castro Theatre, right at the epicenter of Harvey Milk’s political influence. But watching Milk mere days after the election of Barack Obama was simply uncanny. Entire chunks of Dustin Lance Black’s script, much of it taken from Milk’s own writings and recordings, sound exactly like the political oratory of the Obama campaign. Milk’s comedic tagline («I’m here to recruit you») is a little too out-and-proud for this cagey new administration, but the sincere soundbite – «You gotta give ‘em hope» – provides the notably absent GLBTQ piece to the Obama puzzle.

So, where was Milk, and were Focus? On the one hand, the studio has an Oscar campaign to run, and so getting the film out into the world where it might have had some impact on the anti-gay legislation that swept into office on 4 November was clearly of secondary importance only. It represents a degree of corporate self-interest hardly in keeping with the film’s subject, but I’m glad to give Focus a pass, on the grounds that few if any works of cinema ever result in direct political impact. Certainly the self-selected audience for Milk is not undecided on the question of GLBTQ rights. But perhaps more significantly, the absence of Milk from the pre-election scene mirrors the deafening silence from the Obama-Biden camp were gay rights is concerned. The official platform offers comforting assurances, but the selection of professional homophobe Rick Warren to deliver the invocation at Obama’s inauguration (the Pastor of Saddleback Church has publicly compared gay marriage to pedophilia and incest) tells another story.

And so, with Milk, we have a film that must be discussed as a piece of political rhetoric, chiefly because its other properties merit so little consideration. Van Sant coaxes fine performances from Sean Penn, Emile Hirsch, and James Franco, as well as rather cartoonishly overdetermined ones from Diego Luna and Josh Brolin. But mostly Milk hits every last «beat» of the biopic genre, roughly covering the period from Harvey Milk’s arrival in San Francisco to the immediate aftermath of his assassination. The script, particularly in Milk’s frequent stump speeches but even in much of the private, internal banter, foregrounds the force of rhetoric, the appeals to ethos and pathos, always situating gay rights (and I mean «gay» here; it is a very gay male film) firmly within a civil rights framework (that is, patently reaching out to liberal-centrist values) even as Milk the man abjures such approaches as cowardice. Milk’s rhetoric of hope and the promise of America for all dovetails so completely with that of the Obama campaign that it cannot be accidental on Van Sant’s or Black’s part. And yet, Milk was precisely the part of the Obama message that had to be, well, hidden in the closet until the election was safely in the bag. Sit tight, don’t make waves, it’ll all be okay.

The biggest flaw of Milk, and clearly Van Sant’s calculated capitulation to Hollywood formula filmmaking on behalf of «the cause», is its unreconstructed biopickiness. Even while Harvey Milk tells cogs of an uncomprehending political machine, «I’m not the candidate, the movement is the candidate», Milk chugs on, spinning History as if it sprang from the brow of one brave man. Where did Milk come from? The film opens with a montage of news clippings showing raids on gay bars, and then cuts immediately to Milk’s final days in New York City. Title card: «New York 1970». Van Sant and Black have completely elided the Stonewall Riots, the actual birth of the American gay rights movement and the foundation for everything Milk was able to accomplish. (This omission is like profiling Abraham Lincoln and leaving out the Civil War.) Would an acknowledgement of this crucial historical fact somehow undermine Harvey Milk’s singularity or greatness? Of course not, but it would depend on a vision of historical action that is dialectical and materialist, reliant not on the cult of personality but on what brave human beings achieve with the circumstances they’ve got.

None of this was immediately apparent to me on my first viewing of Milk, because the film is undeniably seductive. Penn’s performance is bright, ingratiating, with a touch of melancholy, and there are just enough odd touches to keep things from getting too painfully rote. (For instance, why cast Jeff Koons as former SF Mayor Art Agnos? That’s why we like you, Gus.) But the lumbering force of the biopic is next to impossible to defeat. In fact, if there’s one thing the scares many of us on the U.S. left about the coming years, it’s the possibility that, in the election and the speeches and hope and change, and all of those beautiful, post-Soviet murals bearing Barack’s gorgeous face in red, white and blue, that maybe we’ve all fallen for the logic of the biopic writ large. Are we waiting for a Great Man to lead us charging through History? Granted, the charges from the McCain camp and other right-wingers, that Obama was an empty celebrity (derisively referring to him as «The One»), were unfounded and borderline racist. (We have a long, sad history in this country of expecting our black people to entertain us.) Milk sells us a complex gay rights struggle in the form of a one-man army, and a cuddly, ragtag one at that. (Where are the bathhouses, the drug use, the beginning of AIDS?) In a similar vein, Obama stands at the podium to inform us that where Iraq or the economy are concerned, there will be no easy solutions, but reminds us that we can support the cause by buying his t-shirts and winter wear.

Of course, Obama post-election and Milk in this piss-poor Oscar season are counting on the same thing: what, you prefer the other guys? And of course the answer is no. The Rick Warren affront is just another bitter pill we progressive-leftists will have to swallow, proof positive that the new president is building a broad coalition. Obama demonstrates that he has some core values, and beneath it all a basic Christian faith and morality. We’re just supposed to be happy if he checks it at the door when it comes to actual civic matters. Are the «culture wars» over now that Obama has won the presidency, or will they simply be fought out on other terrain? The lame-duck cinema of 2008, Bush 43’s final year in office, has been risible in terms of its muddled ideologies. A film like Religulous, a pro-atheism screen by unctuous comedian Bill Maher and directed by all-purpose vanity-project-helmer Larry Charles (Borat, Masked and Anonymous), made a significant amount of money mocking people of faith, essentially treating religious belief with the exact same level of contempt that evangelicals reserve for atheists. («Oh, yeah? So’s your old God!»)

Another right-wing film in hipster clothing, Darren Aronofsky’s The Wrestler is, believe it or not, a heartfelt revaluation of the Reagan Era, a cinematic power ballad about a washed-up pro wrestler (Mickey Rourke, giving 110%) clinging to the grand old days of Quiet Riot, Def Leppard, and smashing juiced-up guys over the head with folding chairs. In the end, «that pussy» Kurt Cobain is blamed for taking everyone’s fun away. While The Wrestler could’ve been a sad portrait of a deluded man out of time, male melodrama runs amok, turning his delusion into heroism, and his brand of moronic pop culture into grand opera for a working class that doesn’t recognize itself as such. The film doesn’t recognize it either. As for other U.S. films speaking to The Final Days, the less said about Oliver Stone’s «W.», the better. Essentially an illustrated version of one of those «Bushisms» desktop calendars, the film is little more than a clumsy compendium of Bush 43’s various blank-eyed, idiotic remarks, delivered by a hamstrung Josh Brolin. (Taste the flopsweat!) Featuring a rogues’ gallery of a cast all acting within their own private spheres of influence (Thandie Newton’s Condi Rice and Scott Glenn’s Rumsfeld are particularly dire), «W.» is, above all, Brechtianism gone horribly awry, since the experience of watching it is little more than reality-testing and self-congratulation regarding one’s awareness of current events. 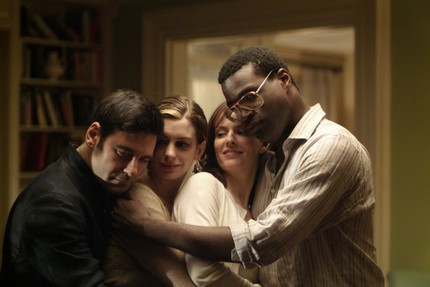 But if you are looking for a film that summarizes our hopes and fears at this bold new moment, our genuine vision for what Obama’s U.S. might become – a place of inclusion and forgiveness, a zone of contention and a collision of faiths and philosophies, and above all a chaotic mess that, eventually, gets to its destination – I humbly refer the reader to Jonathan Demme's Rachel Getting Married.
Although some U.S. critics have lambasted the film as a de facto Obama rally, what with its unremarked-upon multi-ethnic families and heterotopic approach to international traditions, at its core Rachel asserts that we are all always knee-deep in the shit of life -- our past wrongs, our heritage, our privilege, our «thrownness» as a philosophical old Nazi once put it (Martin, you too can be forgiven!) -- and that we just have to pick up and move, from right where we are.

In deutscher Übersetzung abgedruckt in CARGO 01/2009